Thanks for the nice messages I received following last weeks ‘kicking’ based blog.  If you are keen to find it again, you can get it here:  https://round1fitness.com.au/common-errors-in-kicking-technique-for-developing-afl-players-and-how-to-fix-them/

Today is more of the same stuff I guess – but specific to that bug bear of all supporters (and especially coaches) – kicking for goal. 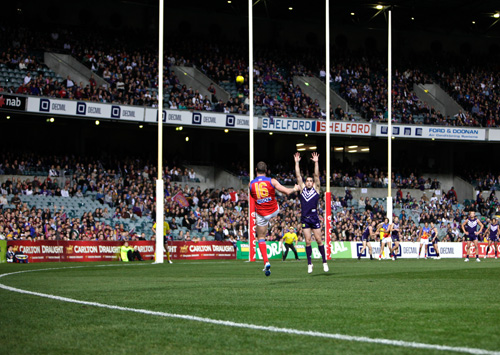 What is it that makes kicking SOOOO much harder when you are kicking at a 7m opening than it is when you are trying to pinpoint a 1m wide object that is probably moving???  It is completely counter-intuitive but it is 100% true…kicking for goal is just ‘HARDER’.  So why exactly?

Well, there are two main reasons:

1/.  Because you are aiming for something that is 7m wide, you aren’t really ‘aiming’ for anything at all…you are just kicking towards a wide, open space.  And that’s ‘bad’!

2/.  Set shot goal kicking isn’t ‘natural’ because most players don’t think about what they are going to do (and how) until they are awarded a free kick 30m out and have to go back and kick at goal.

I am going to address these two issues in a moment, but before I do I just want to get to the important bit – my ‘how to kick at goals’ life plan if you like.  It goes like this:
“Right Hand, Right Foot, Right Post – Left Hand, Left Foot, Left Post”.  (To be fair, this has been around for years and I think has been originally credited to Malcolm Blight…but regardless, it is really, really good advice!).

What does that little rhyme mean?  If you are a right footer, drop the ball STRAIGHT on your foot (with your right hand) and aim DIRECTLY at the right hand post.  If you are a left footer, well, use your left hand and aim at the left post.  Most of us have a pretty natural ‘hook’ in our kicks and – wind aside – are well served just by aiming DIRECTLY at the inside of the goal-post…it’s a MASSIVE (TALL) target and one that is easy to focus on.

So – basics aside – Back to my ‘two main reasons’ and specifically reason #1 that you aren’t kicking as many goals as you should – You haven’t chosen a target point.

Whatever you do, don’t kick ‘at the goals’.  If you take my little poem to heart, aim at the goal post (right one for right footers, left one for left footers).  Otherwise – particularly on windy days, pick ‘something’ behind the goals and kick it there.  Some people say the goal umpire, others talk about looking for a tree behind the goals…whatever works for you.  Believe it or not, the best golfers in the world don’t aim at the ‘hole’ – they aim at a mark inside the cup – a small, precise target.  You need to take the same approach when kicking for goal – aim for a ‘spot’ and NOT for a 7metre wide space!

Secondly, if you want to be ‘good’ at kicking for goal, you have to PRACTICE and you need to have a plan.  Some people like to ‘step out’ their set shot routine, others are happy to ‘judge it with their eye’ but one thing is for sure.  When you are lining up kicking for goal, you should be doing so with CONFIDENCE that you have a rehearsed routine (walk for three steps, increase speed for 5 steps, 1-2-3 kick or whatever it is) that is working for you at training.  I know, I know, you feel ‘stupid’ measuring it out and you just want to ‘kick it’ but having a consistent routine is very important when it comes to performing ‘repeatable’ tasks – think of a tennis player serving, a basketball player taking a free throw, a fast bowler running in to bowl, an NFL place kicker shooting for a field goal – set shot goal kicking is footballs ONE equivalent of that.

You need to have practiced your routine to the point where you DON’T have to think about it – you simply go back to the top of your mark, turn, take a breath and execute your routine!

I have been known to miss a goal or three during my playing days – and there is one thing I do know for certain.  If you don’t commit and PRACTICE, well, things aren’t going to get better.  If you want to be a good goal-kicker, treat practicing it as an important part of your weekly training.  And again – you are better off practicing for 10-15 minute 2-3x per week, than trying to dedicate a 45-minute ‘BLOCK’ to one skill, once per week.